Good Morning – today is a day that we remember those who made the ultimate sacrifice for our country.  I am going to share with you several stories of life lived, to illustrate the gratitude we should have for those who gave their lives for our freedom.

I stand here today, in the shadow of my grandfather’s home.  Just a few blocks away sits the home where he lived until his death.  This quiet man who died when I was about 10 years old, who got up, grabbed his lunch pale and clocked in at Barber Greene for decades.  He was a jokester, with a twinkle in his eye when you knew he was up to something.  He was a stern disciplinarian and someone that you respected so much, you never wanted to let him down or get on the wrong side of him.  He loved his family and his country.

To me he was grandpa, to others he was Staff Sergeant Alvin Peterson, United States Army Air Corps.  Someone who as a young man marched through Europe, entering France in the days following D-Day in June 1944.  My family was able to visit Normandy a few years ago, to try to put ourselves in his boots, to visualize what he may have seen but even if he had described it, which he never did, it is nearly impossible to fathom what took place there to secure our freedom.  His story, is just one story. 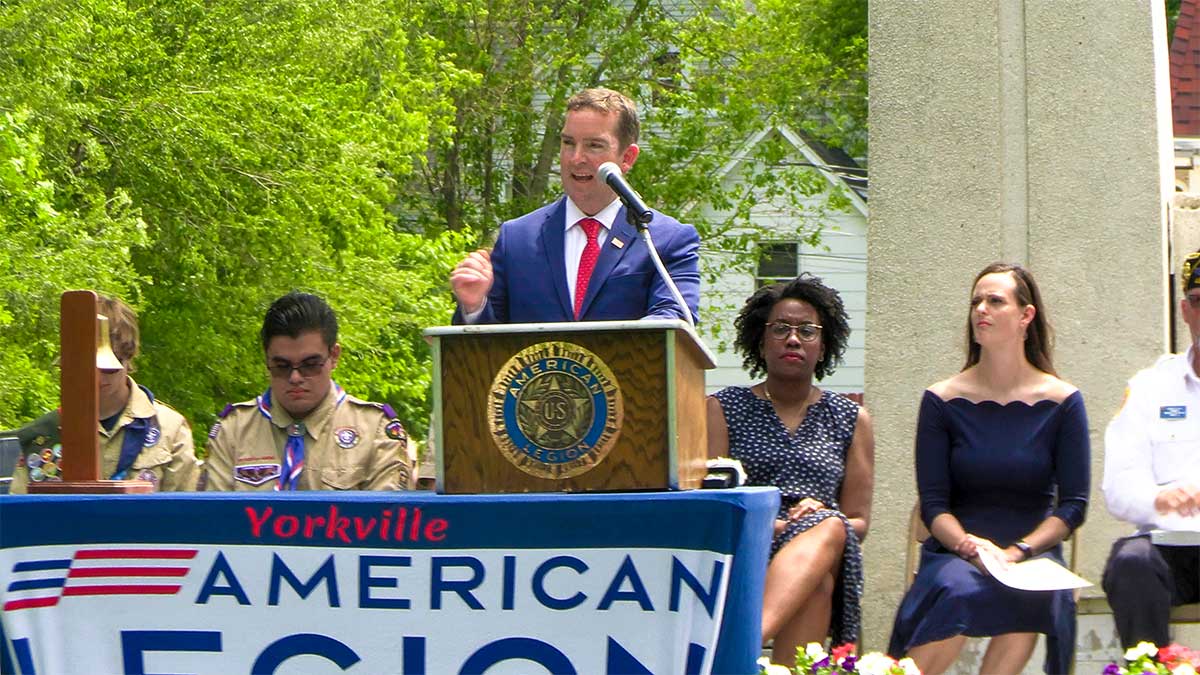 Behind me is an eternal flame and a memorial to those who made the ultimate sacrifice for our country and our freedom.  It is a permanent reminder to the residents of Yorkville and the People of Kendall County that, as the American Legion says, Freedom isn’t free.  While many were involved, a close family friend Nick Moisa chaired the group that saw through the construction of this monument.  Nick was on the U.S.S. Nevada when the Japanese attacked Pearl Harbor.  Like grandpa, he was another person that you never wanted to let down or get on the wrong side of, for those of you that may have known Nick however, you also know that he was not shy about talking about his experience.  I am forever grateful for the stories he shared that I now can pass along.  One such story was recalling the pilots smiling at them as they were reigning down terror from the sky and all he had left was to throw a potato back at their plane.  Left unsaid, was how many were lost that day, that gave their lives that day for our country.  His story, is just one story.

Finally, as some of you know, at the age of 75, my father took his life last fall.  It remains difficult for me to process, a United States Army veteran, dad was a long time American Legion member.  His life illustrates a former and some cases a continuingly taboo topic, that of the mental health of our veterans.  The scars that the returning carry with them forever.  His story, is just one story.

What my grandfather, father and Nick’s stories, all had in common was that they came home from the service, went to work and raised their families and while they may not have spoken directly about the horrors of war, they NEVER forgot their brothers and sisters in arms that gave their lives.  In their own ways they celebrated their lives by living life to the fullest that they knew how.  By erecting this monument behind us and by passing on their love of country to those around them.  As General Colin Powell said on Memorial Day in 2004, “each life given in liberty, is a life that has not been lost in vain”.